<< Part IV | This is Part V of a multi-part series on Bitcoin block propagation with IBLT.

Rusty Russell has dumped mempool data from 4 different nodes around the globe. It covers a week's worth of data. The purpose of the dumps was to get an idea on how similar the mempools are. The effectiveness of IBLTs is highly dependent on the similarity of mempools. The data covers blocks at height 352305 thru 353025. For every block and node, it will list:

Now, we use this as input to determine the IBLT sizes for several different failure probabilities: 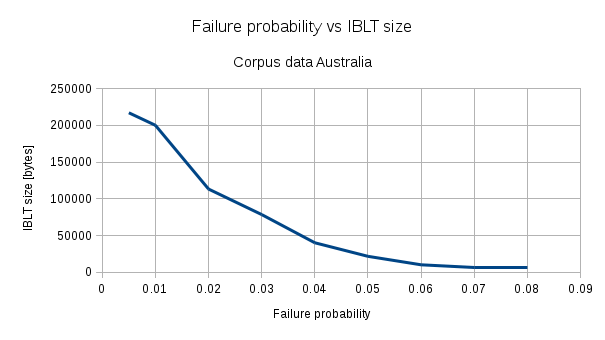 Some stats from the data set:

The result above is just a first step. There are several optimizations to be made to further shrink the IBLT:

In part VI of this series I'll show you results from scaling up the corpus data 10x, 100x and 1000x. Or if we have results from the above mentioned optimizations, I may decide to write about that instead. Stay tuned!